As a fun change of pace, I decided to write up a beginner's guide to hacking save states for video games. In this tutorial, we're going to take a look at Fire Emblem 7 for the Game Boy Advance (GBA). Specifically, we're going to hack the health bar of the final boss (spoilers!) to be 1 HP. In doing so, I'll cover the simplest practical reverse engineering technique for game hacking: differential analysis. I'll be using an emulator for Android called John GBA, so we'll also get into a few details about how it works.

Conceptually, this guide is very similar to the start of the tutorial provided by Cheat Engine. The main difference with this writeup is we're going to hack an actual video game by modifying an emulator's save state data rather than using a debugger on a running toybox program. Also, I'm going to perform all the steps using only standard GNU/Linux programs and a little bit of Python scripting. Thus, this guide is intended for readers familiar with basic programming and terminal CLI who may not have considered hacking a video game before and want a simple realistic example to get started.

A Primer on Emulators & Save States

I'll start with a brief summary of what an emulator is. Put simply, it reads a program written for one computer architecture and executes it on another. In our case, the emulator I'm using can run games written for the GBA on an Android device. The most basic way of accomplishing this is using interpretation. Specifically, the emulator mimics the original architecture by allocating memory to represent RAM, CPU registers, etc. It then loads the program into the memory just as the emulated system would and steps through each instruction, modifying the memory accordingly. The collective data values contained in the emulated hardware at any given point is the emulation state.

Interpretation is the easiest form of emulation to implement, but slow because each hardware instruction on the original system is translated into one or more (often many) instructions on the emulator's hardware. To get around this, real emulators often compile and optimize the emulation logic "on-the-fly" using a technique called just-in-time (JIT) compilation. Optimizing emulators is an interesting topic for discussion, but beyond the scope of this guide.

What we do need to understand is save states. By pausing the emulation and storing all the data associated with the emulation state, the emulator can return to that state at any later time. All it has to do is read the saved state back into the memory representing the emulated hardware. This gives us a clean way to hack video games by intentionally corrupting save states. All we have to do is modify some data in the saved state and when the emulator loads it, it'll propagate our modifications into the emulated system:

But in order to do that, we first have to figure out the formatting of the emulator's saved states.

Lucky for us, this emulator's save state formatting is fairly standard and we don't need to understand most of the details for our basic memory hack. First, we know the states have to be saved somewhere in storage. Turns out it's easy to find by just browsing: <internal_shared_storage>/Johnemulators/GBA/state. In this directory we find two file formats: .jg# and .js# where # is the slot number for the save (organizing saves as a linear list of slots is typical for video game emulators). It's easy to see which files we care about for Fire Emblem 7:

A good first step towards figuring out their formats is to run file and see if there are any recognizable patterns:

Much to our luck, despite the custom file extensions, each save state is actually just a JPEG image and a compressed data file. We don't need to worry about the images, so let's focus on the data files. First, copy them off the Android device into a local directory. Also, make sure to save a backup copy somewhere safe so you won't lose your data if you make a mistake! Next, let's decompress one of them:

And take a look at the beginning of the data:

Another lucky break for us. We can see the canonical name for the game (FIREEMBLEM) at the beginning of the data. In fact, if we search the game's ROM (the program as it's stored when it isn't running), we'll see the same name near it's beginning too:

We now know that after decompressing, the data file contains the plain bytes of the game's memory. Next, we have to figure out which bytes to overwrite in this 723 KB file.

The simplest reverse engineering technique for finding a data variable of interest is differential analysis. Remember that our goal is to modify the health of the final boss for an easy victory. It's reasonable to assume that somewhere in the program's memory, there's an integer that keeps track of of the current health. Also, since the game is actively running, this variable shouldn't be relocated in memory too often. The question is: how do we find it?

We'll use differential analysis. Specifically, we'll save the game's state, inflict some damage on the boss, save the new state, inflict more damage, save and so forth. Since this game shows the HP value and the damage of our attacks, we should know the exact health of the boss at each state we save. All we need to do then is compare the memory of the states and find a location that contains the correct health value across all the states.

So let's begin. It's time to confront the big bad dragon at the end of Fire Emblem 7: 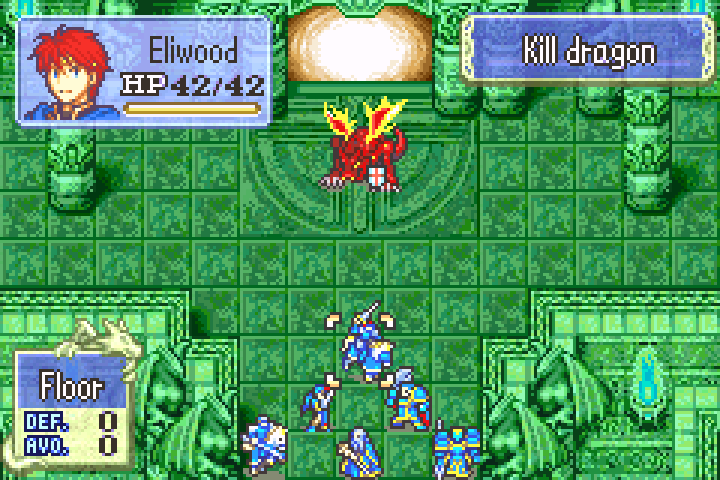 This overgrown lizard is quite the challenge if you approach him under leveled and without enough good equipment, but rather than working harder by reloading a past save and redoing half the chapters, we're going to work smarter and show the boss who the real master of this game universe is!

At our first save state, he's at full health. Unfortunately, this game is cheeky and hides his HP at the start of the fight: 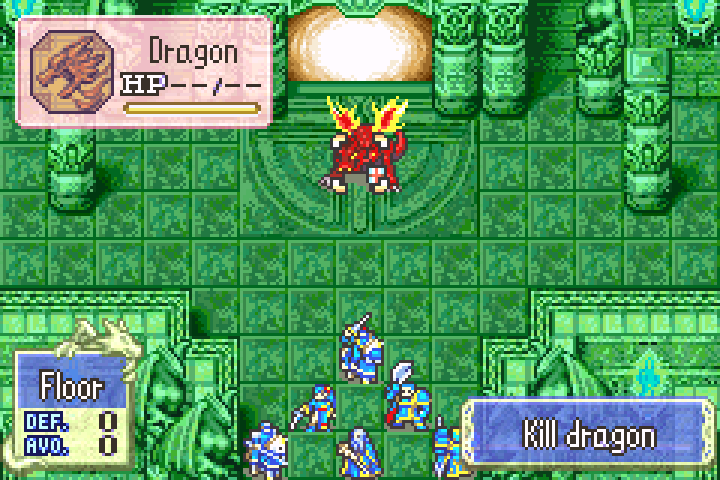 This won't be a problem though because the game shows exactly how much damage we inflict: 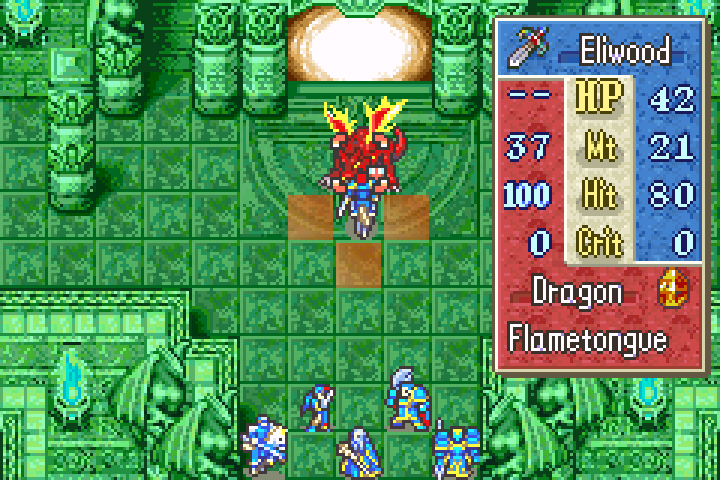 In this case, Eliwood's sword will inflict 21 damage. He's seriously under powered, but can still survive the attack:

At this point, we make our second save state and note that we've inflicted 21 damage so far. As Athos prepares to cast magic on the foul beast, we can now see the HP of the boss: 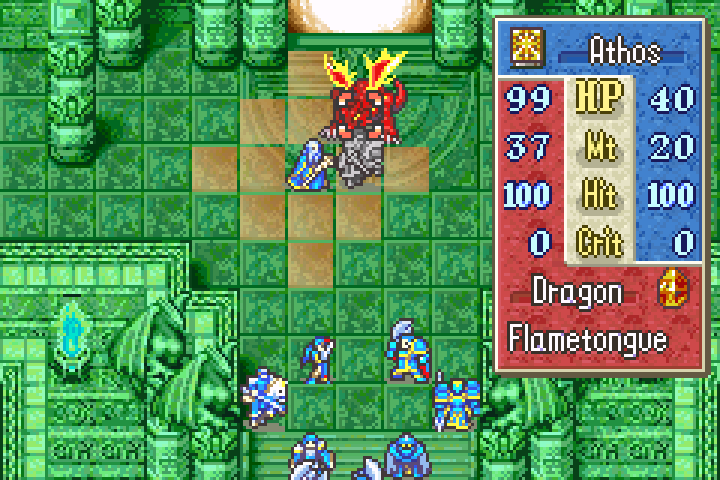 He had 99 HP when the second save was made, meaning he started with 120. Now Athos inflicts another 20 damage: 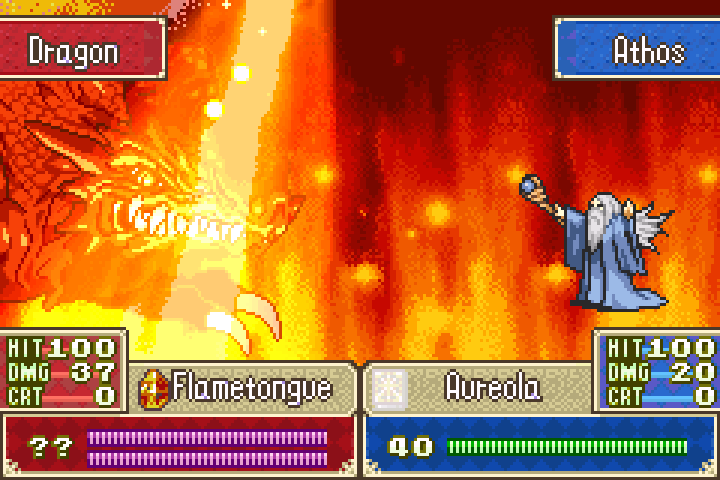 And we make a third save state. The HP of the boss at this save is 79: 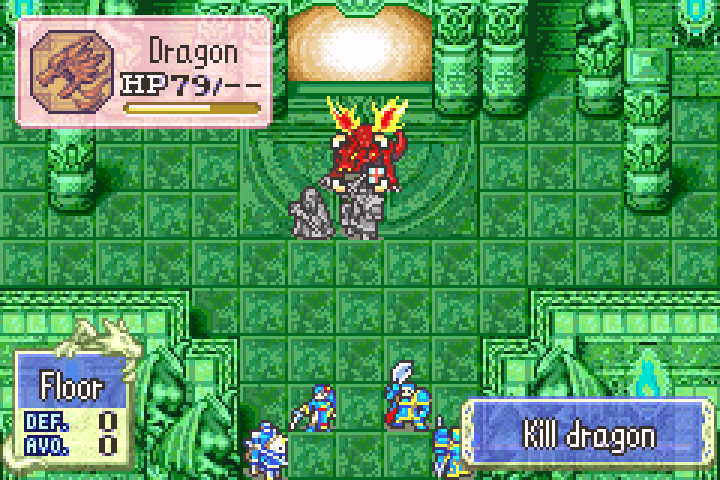 Three states should be enough for our analysis, so it's time to transfer the data over to a computer and get hacking.

As I mentioned earlier, this is a differential analysis. We're looking for a memory location storing a variable that's 120 in the first state, 99 in the second and 79 in the third. In base 16, this is 0x78, 0x63 and 0x4f. Luckily, all these values are small enough to be encoded as a single byte, so we can scan the game's memory linearly without having to consider factors like alignment or endianness. So let's get to work.

To speed up this analysis, I wrote a script in Python. This code is compatible with Python 2 and 3 and the comments are self-explanatory:

Running the search on my states yields three candidate locations:

It's common to get more than one candidate because depending on the game's logic, values like health might be maintained in multiple locations for different purposes (e.g. for rendering it as text on the screen, detecting certain state triggers, etc.). As long as the number of results is few, it's usually safe to just overwrite all of them. If the game crashes, we can always go back and make modifications more conservatively.

Modifying a Save State

Now that we know where to make our modifications, let's set the health of the boss to 1 HP! Here's another Python script to do just that:

Now we just apply the patch:

Which will create a new save state with the filename of the original plus the suffix .patched. All that's left is to replace the original save state in John GBA with our patched version and then we're ready to slay a dragon with ease.

Not so tough now, are we dragon? 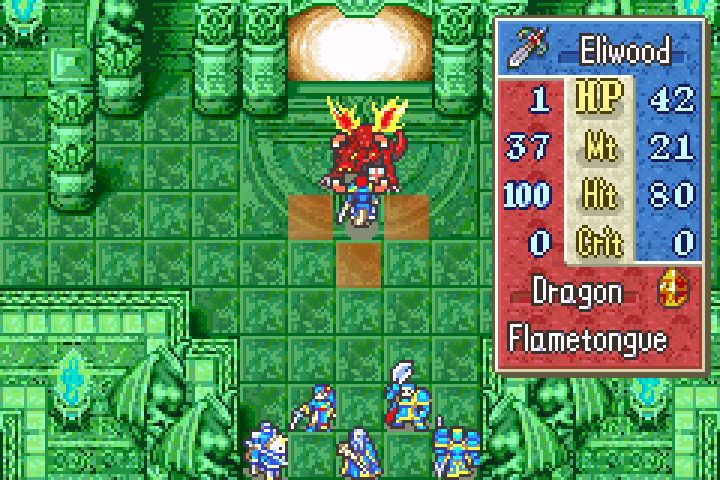 And down it goes in one hit. How embarrassing: 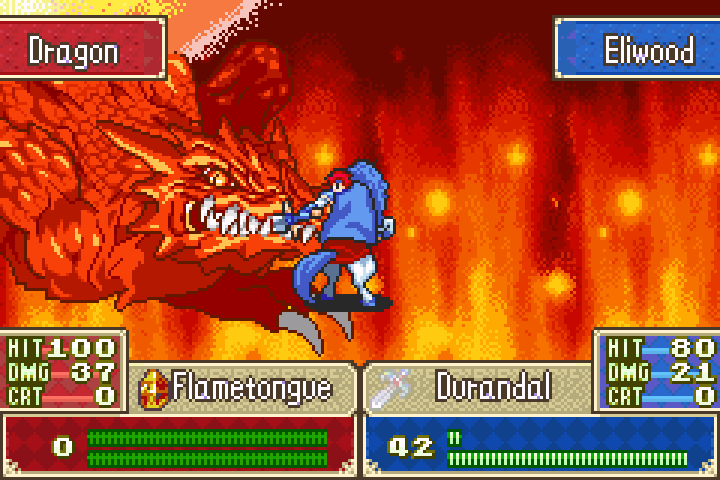 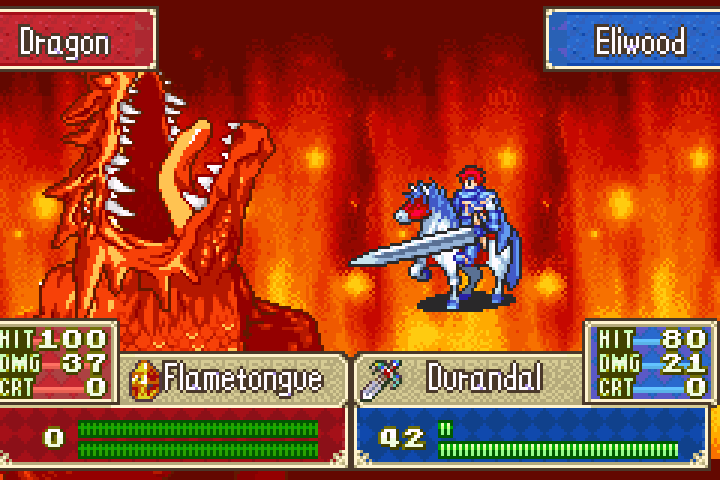 So that's the most basic approach to hacking a video game save state. I hope you've found this guide entertaining and informative. I'd like to reemphasize that this only scratches the surface of the broad area that is reverse engineering. The beauty of differential analysis is we didn't have to know any low-level details about how the Game Boy Advance hardware behaves or the game's logic. This makes differential analysis one of the most transferable techniques. That said, it also has limited applicability. For example, if the game developers wanted to prevent tampering, even the most basic obfuscation (e.g. doubling every integer before storing it in memory) would thwart our analysis. There are also fun hacks that cannot be implemented via a one-time memory patch (e.g. giving your character invincibility). So if you find this topic interesting, I recommend checking out other tutorials floating around on the internet.

Thanks for reading and happy hacking.